Facebook Memories can be tough at times, but today it reminded me that I finished my first quilt 9 years ago. In 2009 I was living in St Louis with my sister. Working at a job that I didn't love (and within a few months would leave and move to Columbus). I had purchased a cheap Singer sewing machine at Kohl's and decided that I was going to make a quilt!

I went to Hobby Lobby (...I know...) and got fabric for this quilt. I got the most inexpensive I could get because I also didn't have a lot of expendable cash at the time. I got a mix of solids and prints.

When I got home I cut everything up with scissors...who knew what a rotary cutter or mat were...and those are expensive!

I sewed away while I probably should have been working and finished the quilt top in a few days. Again, didn't know how to finish it. So I got some batting and a backing and turned it inside out and sewed around it and then flipped it. Again, didn't know that quilting it was a thing. So I tied it with some embroidery floss.

And here it is in all of its 2009 Blackberry camera glory. Oh how far we've come! 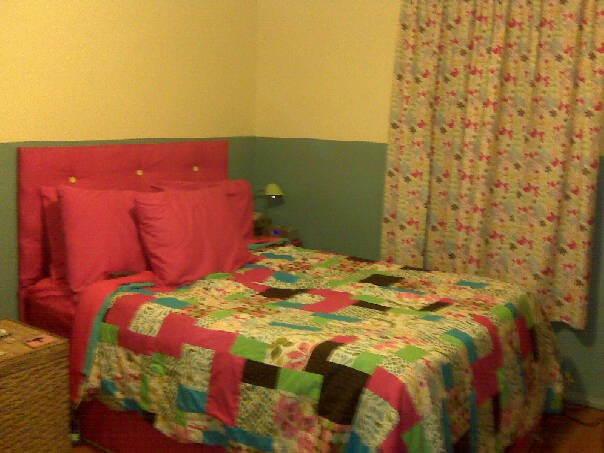 After I made the quilt, if you know anything about me I couldn't stop there....so I made curtains, that lovely headboard, and pillow cases (again...no idea how to do that) and decorated the whole room.

That was the only quilt I made until a little over a year later I found myself unemployed (that damn 2010 election didn't go so well) and living back at my sisters going stir crazy.

I thought "I have a sewing machine I could make another quilt...." And that is when the quilting craziness really began....

I still have the quilt. It moved with me and kept me warm at my Columbus apartment. And while it isn't the prettiest thing you have ever seen, it's still a pretty great first quilt if you ask me!
- September 09, 2018 No comments: